The tournament which took place at Government Practising School Kumba Town was watched by a mammoth crowd drawn from all the 10 Bafaw villages in Meme Division among whom were the cup donor, the Nfon of Kumba and Paramount Ruler of the Bafaws, His Majesty, Nfon Mukete IV Ekoko and the Senior Divisional Officer for Meme division represented by the Divisional Officer of Kumba I Subdivision, Ali Anogu. 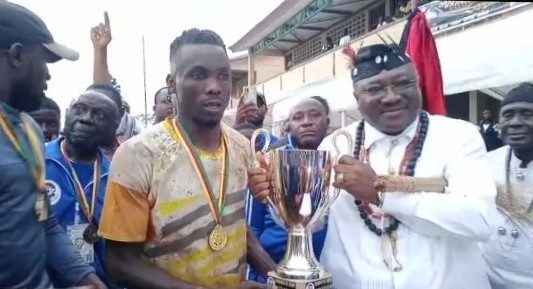 The one month-long football tournament served as a forum for the advancement of unity and togetherness of the Bafaws. One of the main objectives of football tournament was to foster a peaceful coexistence among the youths during the long vacation. The final comes at a time when the Nfon of Kumba and Paramount Ruler of the Bafaws just returned to the country after a working visit to United States and the United Kingdom where he communed with Bafaw sons and daughters for the development of Kumba and the entire Bafaw chiefdom.